The ship HMT King Stephen was captured and sunk by the German Navy torpedo boat SMS G41 on the 24th April 1916. She was working as a Q Ship (hidden armament) to lure U-Boats into action but had the misfortune to steam in the German High Seas Fleet involved in the bombardment of Lowestoft and Great Yarmouth.

Lt Phillips RNR and the rest of the crew were taken prisoner and the boat sunk. 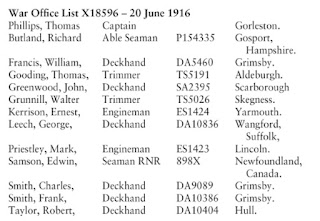 The Germans were interested in the crew of this ship as it had left the crew of the Zeppelin L19 to drown (it had been damaged on an air raid and crashed into the sea and 19 crew were counted as being alive). Phillips had to prove that he and the crew were not the men who abandoned the L19 men to die. Phillips and his men had only recently joined the King Stephen after it had been requisitioned by the Admiralty.