Planning to use this page to post up some video links relating to myths of the Easter Rising.

Posted by Johnny Doyle at 08:33 No comments:

Lyn Ebenezer's book "Frongoch and the birth of the IRA" gives details of the following casualties from Frongoch :

Maurice Fitzsimons :  appendicitis at Frongoch but recovered after poor treatment. Survived and active in WoI.

Thomas Stokes of Enniscorthy : died of an illness caught at Frongoch

William Halpin of Dublin ; tried to slit his own throat; committed to Grangegorman where he later died

Daniel Devitt escaped 4th August 1916 and was found wandering the Welsh countryside. He had suffered a breakdown and walked out of camp unchallenged rather than trying to escape.

Mention is made of a Padraic O' Maille escaping with help from a girl but it appears he may have been moved to another location.

Dr Peters, the local doctor who visited the camp, took his own life on 14th December 1916.

John Cullen, imprisoned Portland and Lewes rather than Frongoch. Died 29th May 1918 aged 21

John Halpin. Suffered depression and died in Grangegorman Asylum in 1917

John Wallace, noted as died in Frongoch 14th March 1917. Need to follow up on this item as Frongoch would be closed for Irish prisoners in December 1916 and open again for German PoWs.

Eunan O'Halpin and Daithi O Corrain's book "The Dead of the Irish Revolution" list the following  :

Christopher Brady. Imprisoned in Wandsworth and Frongoch. Released in November 1916 due to ill health. Died in Dublin 24th January 1917 from pneumonia.

William Partridge fought in College of Surgeons. Died two months after being released from Lewes prison on medical grounds.

William Staines (aka Liam, brother of Michael) died 2nd November 1918. Wounded in the Rising, his death was attributed by the authorities to influenza and septicaemia rather than imprisonment

Would be interested if anyone else has any more to add.

Posted by Johnny Doyle at 23:57 No comments:

Formed in Dublin in March 1916, there doesn't appear to be too much information regarding 2nd (Garrison) Battalion, Royal Irish Regiment. It appears to have been designated for Home Service.

The Long, Long Trail website indicates it remained in Dublin until April 1918 where it's name was changed and it went to France

2G/7 CQMS Robert Gamble was a Dubliner. Killed during the Easter Rising near Beggar's Bush Barracks on the railway line.
We can assume that most of the above were in Dublin at the time of the Rising, though the Battalion is not listed in the various books that give details of the units present on 24th April.
Privates Waters and Flynn mentioned as injured/killed at the Magazine Fort do not appear to have been assigned 2G/ numbers.
Henry Agnew appeard to have joined the unit on the 15th April and assigned the number 2G/646.
Lt. Colonel Sir Frederick W. Shaw, D.S.O. who made his way to Beggar's Bush Barracks at the start of the Rising (he had been in command of the Ulster Volunteer Force aligned 2nd Bn, Loyal Dublin Volunteers in the run up to WW1).
2nd Lt Edward Gerrard, Royal Field Artillery, arrived in Beggar's Bush Barracks on the 24th April and noted that 2nd (Garrison) Bn, Royal Irish Regiment men were there :
one or two ranker officers (promoted from the ranks)
4 NCO's
10 men (including 3 invalids)
I had read somewhere about the unit possibly being at Richmond Barracks - possibly in conjunction with the research on Flynn and Waters or re the death of 2G/213 Pte James Cavanagh, from Co Monaghan, who looks to have been killed in the South Dublin Union area (another former Royal Irish Rifles soldier)
https://www.cwgc.org/find-records/find-war-dead/casualty-details/899910/james-cavanagh/
The UK Soldiers Died in the Great War has Cavanagh as died in Gallipoli. More likely he was wounded in Gallipoli and that was the reason for his transfer in Dublin.

A few details of their service but nothing re role in the Rising yet.

The 2nd Garrison Battalion, Royal Irish Fusiliers was also formed in Dublin around April 1916. This appears to have not been for Home Service - moved to Templemore in May 1916 and then sent overseas.

He appears to have been a pre-war soldier and entered France on 8th October 1914 with 2nd Royal Irish Rifles, number 4550.

Posted by Johnny Doyle at 02:59 No comments:

During the attack on the Magazine Fort on the opening day of the Rising, Monday 24th April 1916,  the sentry at the gate was overpowered without shots being fired.

This looks to have been Private John Waters, no 9901, 2nd (Garrison) Battalion, Royal Irish Regiment.

His service records mentions the attack and notes his time in hospital.

He appears in a newspaper Roll of Honour from May 1916 but does not appear in the 1916 Rebellion Handbook among the list of wounded from the Royal Irish Regiment. 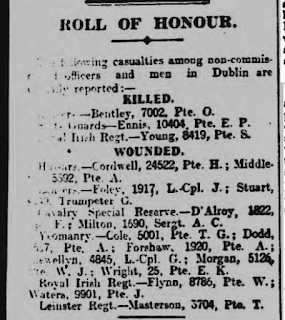 He was discharged from the Army in June 1916 so may have had to face the above prosecution.

His number, 9901, does not appear to have been issued by the newly formed 2nd (Garrison) Battalion.

The attack happened on his birthday, 24th April. He was born 24th April 1876 in Duncannon, the son of John and Mary Waters.

Inside the Magazine Fort, one sentry was shot in the leg. 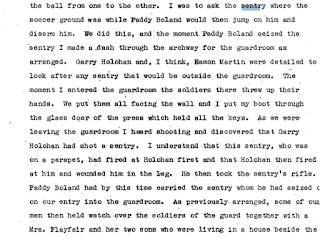 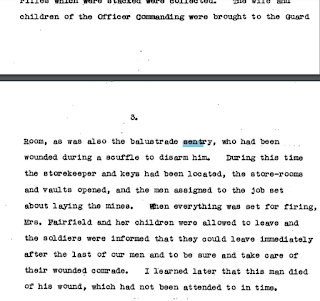 Flynn died in June 1916 as a result of an issue with his femoral artery.

The Edward Quinn who appears a few lines down from Flynn is my Gt Gt Grandfather. This was an unexpected find while researching Flynn.

Flynn appears to have tried to enlist in the Army in 1915 but discharged as not likely to make an efficient soldier. He had a wife and a rake of kids sadly. 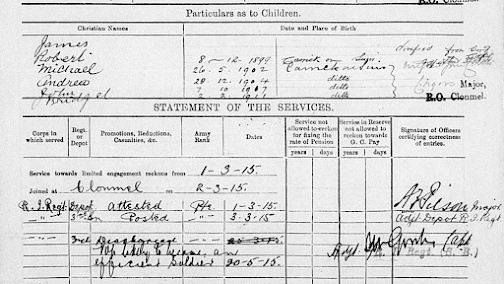 In the 1916 rebellion Handbook, Flynn appears in the list of Royal Irish Regiment soldiers killed and he is noted as being from Carrick on Suir. He is buried in Kilkenny

Posted by Johnny Doyle at 13:54 No comments:

One answer might appear in this presentation re Easter Rising Myths

Posted by Johnny Doyle at 18:40 No comments:

One of the nice things about delving into archives is finding documents in different repositories that join together.

History Hub has a letter from Patrick Pearse to Eamon de Valera dated 11th March 1915 promoting de Valera to Commandant of the 3rd Battalion, Dublin Brigade. It's a nice hand written letter on Irish Volunteer headed paper showing the Volunteers HQ as being at 41 Kildare Street.

It also confirms the appointment of Captain Fitzgibbon as the Vice Commandant and Captain Begley as the Adjutant. Pearse has mislaid the name of who was to be appointed Quartermaster of the battalion.

The appointment of the above is confirmed in a copy of the Irish Volunteer paper dated 20th March 1915  available on the Military archives site.

The Quartermaster for the 3rd Battalion is named as Volunteer James Byrne. Fitzgibbon is named as John and Begley is names as Patrick.

Also on the paper is an advert for Hopkins and Hopkins, a business that would become a volunteer output during the Rising and which would be destroyed.

Interestingly, there is a note in the left hand corner re the flag authorised by companies - each company is to provide itself with a flag with a plain gold harp with a green (back)ground.

Fitzgibbon, Begley and Byrne were all involved in the Easter Rising.

Posted by Johnny Doyle at 05:33 No comments:

In the 1911 census, he has become a District Inspector 3rd Class and is stationed in Galway:


District Inspector Percival (Perceval in many documents) Lea Wilson appears to have been commissioned as a Captain in the Royal Irish Regiment in January 1916 without having to go through the steps of 2nd Lieutenant and then Lieutenant :

There are references to him having been in France and returning to Ireland as a result of wounds. I've not seen a Medal Index Card yet to confirm that he set foot in France before the Easter Rising.

His performance as a field officer appears to have been poor and he was sacked by this battalion Commanding Officer according to the records seen by Eithne Hand and discussed on the RTE History Show:

He returned to the RIC Depot in Dublin as a District Inspector on the 17th July 1917 and is assigned to Gorey District in County Wexford from the 1st August 1917.

While he does get involved in some work to interfere with Sinn Fein activities during the November 1918 election campaign, he seems to have been unmolested by Michael Collins and the IRA. Some stories suggest that Collins tracked Lea-Wilson but it is difficult to understand how he would have done so.

In February 1920, members of the Irish Volunteers at The Ballagh, County Wexford conducted a raid for arms. The raid went wrong and a 60 year old woman, Mrs Ellen Morris (nee Murphy), was shot and killed :

As this falls in DI Lea-Wilson's district, he is active in the investigation and subsequent arrest of those involved.

Elaborate measures are taken to imprison the suspects and to transport them to and from the court. The British Army and Royal Navy were involved in the operations.

It appears that the Irish Volunteers in Enniscorthy decided that DI Lea-Wilson was to be shot. This is mentioned in the Witness Statement of Thomas Doyle, Weafer Street, Enniscorthy :


I suspect the Enniscorthy Volunteers subsequently spoke to GHQ and someone made the connection between DI Lea-Wilson in Gorey and Captain Lea-Wilson from the Easter Rising and then made the decision to use men from The Squad to assassinate DI Lea-Wilson.

Of the Irish Volunteers in the raid on Mrs Morris's, all were originally charged with Murder. Later, 18year old John Lacey was charged with manslaughter while the others involved were charged with Unlawful Assembly. 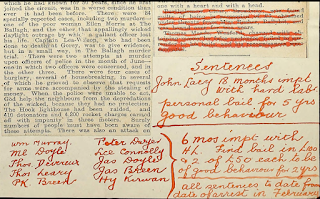 Posted by Johnny Doyle at 05:12 No comments: