Nice document from 1927 is online that goes into detail re the German raid on Lowestoft in support of the Easter Rising.

Posted by Johnny Doyle at 04:48 No comments:

Lots of numbers get thrown around re the number of Sherwood Foresters killed and wounded around Northumberland Road and Mount Street Bridge, often forgetting that some died at the South Dublin Union and that 1 soldier from the 2/5th Battalion was killed in the City on the cordon closing in on the GPO.

The 2/5th and 2/6th Battalions landed in Kingstown first and made their way to The Royal Hospital in Kilmainham on the 26th April with no problems encountered and no casualties.

The 2/7th and 2/8th Battalions landed slightly later in Kingstown and took the route that led to the action at Mount Street Bridge. There is often talk of the Sherwoods being ambushed which is sort of half right. They believed that the School House was occupied and that this was where they were about to go into action. The DMP knew that 25 Northumberland Road was occupied by Irish Volunteers but this information doesn't seem to have filtered down to the 2/7th as they proceeded to the School House past number 25.

Although several civilian members of the Irish Association of Volunteer Training Corps (The Gorgeous Wrecks) had been killed on the Easter Monday (24th April) and the survivors had become part of the garrison at Beggars Bush Barracks, there doesn't appear to have been any attempt to use this local intelligence. The IAVTC men had been fired on from no 25 and wounded had taken shelter in numbers 29, 31 and 33. 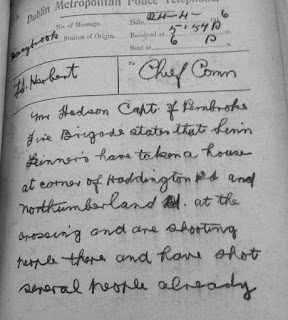 A platoon of the Sherwood Foresters was "grabbed" by Colonel Shaw, the Commanding Officer at Beggars Bush Barracks to assist with the defence of the barracks.

Mr Robert Andrew Anderson, a Platoon Commander with the IAVTC, was wounded by buckshot on Wednesday the 26th April at the "detention post" at the corner of Northumberland Road and Haddington Road. No further information about what this "detention post" was. Mr Joseph Hosford of the IAVTC was shot and killed in Beggars Bush Barracks on the 26th April 1916.

The Bombing School at nearby Elm Park was likewise not approached by the Sherwood Foresters until several hours after the shooting started at 25 Northumberland Road.

Captain Dietrichsen was one of the first shot and he appears to have either died in number 26 Northumberland Road or that his body was moved to this house. Number 26 appears to have been used as a First Aid/Dressing Station, presumably set up by Captain Satchell, RAMC, who was with the lead company, C Company, of 2/7th when they were fired on from number 25. Number 33 is mentioned in the 1916 Rebellion Handbook as also being used as a dressing station.

After the action at Mount Street Bridge finished and the various outposts had been captured (25 Northumberland Road, the Parochial Hall, the School House and Clanwilliam House), number 23 Northumberland Road was used as the Headquarters of the 178th Brigade, having moved up from the RDS. 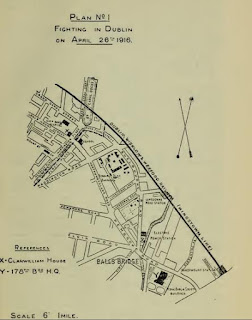 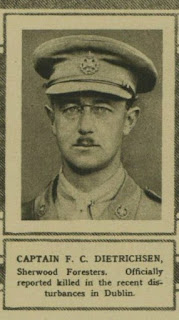 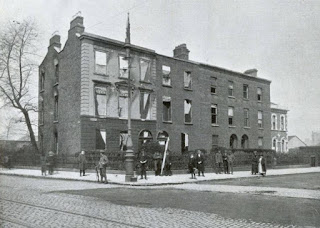 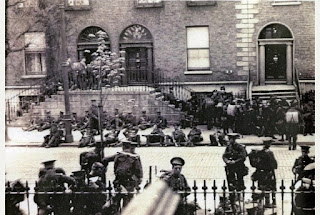 Posted by Johnny Doyle at 04:44 No comments: